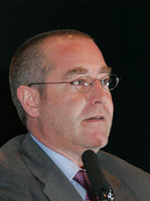 Responding to the speech made by Partnership Africa Canada’s Alan Martin at the Kimberley Process (KP) Intersessional meeting in Shanghai, Dubai Diamond Exchange (DDE) Chairman Peter Meeus replied that he was surprised to see that Martin quoted an Financial Action Task Force (FAFT) report of 150 pages in which Dubai is mentioned only once and that too for about half a page.

Meeus stated, “Nowhere is any reference made to any terrorism financing or similar crimes. Further the info is outdated and not properly substantiated.”

He went on to say, “Secondly, the assumption that our FTZ (Free Trade Zone) is like a little Cayman Island on UAE-territory is also wrong. The FTZ is an integral part of the country and falls under the same customs regime.”

Referring to Marin’s statement that because of undervalued goods coming into Dubai and then being re-exported at huge mark-ups, the African countries that had mined these minerals were being deprived of substantial sums of revenue, Meeus observed,“Thirdly, we regret to hear UAE or Dubai robbed hundreds of millions of dollars from African countries, more specifically Zimbabwe. I believe we have proven by and large that, similar to what is done by the AWDC, we have worked closely together with Zimbabwe through tenders in the Dubai Diamond Exchange to do exactly the contrary of what PAC claims. By doing so we try to maximise the profits for Africa. In our tender, prices actually went up by 20 percent compared to the former.”

Meeus also noted that the KP “is the KP and has a clear mandate and that is to fight conflict diamonds. The KP is not about value but about carats. That is not our decision, that’s the decision of all KP participants and we abide by that. So we are happy to discuss this with PAC, but also with the African producers and with countries like Switzerland and Belgium, which also have a large distribution business to discuss the issue of transfer pricing but not in this forum because it basically falls out of the KP’s core mandate.”

Meeus ended by saying, “The U.A.E. has been a loyal, faithful and committed supporter of the KPCS. If we have the chance and good fortune of being elected as Vice Chair in November, we will take the opportunity of opening all our doors and demonstrating the utmost compliance and transparency which this morning was regrettably questioned,” Meeus concluded.